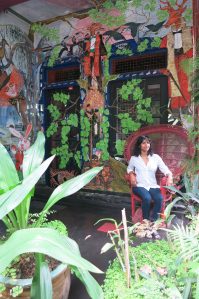 Tanya Selvaratnam is a writer, an actor, a producer, and an activist. She is the author ofThe Big Lie: Motherhood, Feminism, and the Reality of the Biological Clock. As an activist, she has worked with the NGO Forum on Women, the Ms. Foundation, Third Wave Foundation, and World Health Organization. As a producer, she has collaborated with Chiara Clemente, Catherine Gund, Mickalene Thomas, and Carrie Mae Weems among others; and her current projects include Thomas’s “Happy Birthday to a Beautiful Woman”, which premiered in February 2014 on HBO, and Gund’s “Born to Fly” about daredevil choreographer Elizabeth Streb, premiering in March 2014 at the SXSW Festival and playing at Film Forum in New York this fall. For more info and to order The Big Lie, please visit thebigliebook.com.

Women LEAD: What inspired you to write The Big Lie: Motherhood, Feminism and the Reality of the Biological Clock?

Tanya Selvaratnam: I got the idea for The Big Lie after my third miscarriage in fall 2011. At the time I was 40 years old and frustrated not so much by the lack of information but by the conflicting messages in the media about the relationship between maternal age and infertility. I wrote the book that I felt I needed then. It’s part memoir, part exposé, and part self-help. I explore how delaying motherhood intersects with reproductive science, feminism, evolution, popular culture, female friendships, and global economics.
It’s a Big Lie that we can delay motherhood until we’re ready and if we’re not able to have a child naturally then science will make it happen for us. It’s also a Big Lie that we don’t need feminism anymore.

Women LEAD: What needs to change in order to foster more widespread education and open discussion about delayed motherhood?

Tanya Selvaratnam: I propose a number of action items to normalize the discourse around delayed motherhood. These include: Share your stories. Know your fertilities. Strategize for your goals. Advocate for a better future. We need sex education that goes beyond pregnancy and STD prevention, and teaches us fertility awareness. We need governments that support us more in our pursuit of parenthood through measures like subsidized childcare and guaranteed parental leave.

Also, we need to support each other more. We are constantly pitching ourselves against the expectations of others, and this sets us up for disappointment or failure. We live in a judgmental society, and the immediacy of opinion-building through social media and the Internet doesn’t often allow for thoughtful consideration. Embrace the multiplicity of ways in which people build families, and embrace the variety of choices that people make—whether they have kids or not.