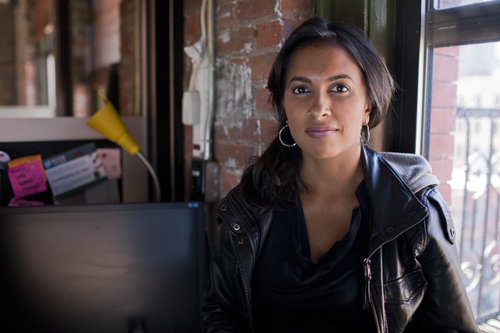 Shalini Kantayya is a Brooklyn-based filmmaker and eco-activist. She is the Creative Director of 7th Empire Media, a company with the mission of leveraging multimedia for social and environmental impact. Her film Catching the Sun explores the race for the clean energy future; Catching the Sun  was named a New York Times Critics’ Pick and released globally on Netflix on Earth Day 2016 with Executive Producer Leonardo DiCaprio. Kantayya finished in the top 10 out of 12,000 filmmakers on Fox’s On the Lot, a show by Steven Spielberg in search of Hollywood’s next great director. Her award-winning sci-fi film about the world water crisis, A Drop of Life, was broadcast on national television in the US and India. She has received recognition from the Sundance Documentary Program, IFP Spotlight on Documentary, and New York Women in Film and Television. She is a Sundance Fellow and a TED Fellow.

Can you tell us about your latest film, Catching the Sun, and what motivated you to produce it?

Shalini Kantayya: When I first visited Richmond, California, I was really moved by this old oil refinery town that the 20th-century industries have left, and left a community with high rates of asthma, cancer, and unemployment. I discovered this little gem of a program called the Solar Richmond program that was helping unemployed Americans try to retool for the industries of the future, for jobs in the solar industry.

I saw a glimmer of the kind of transformation that could happen in cities across the country, which is rebooting and retooling working Americans for jobs in the industries of the future. I could really see that renewable energy has the capacity to transform the lives of people all around the world. That inspired me to make this film called Catching the Sun and to meet some of the inspiring people who are leading that transition.

Can you share with us how you came to produce your sci-fi film, A Drop of Life?

Shalini Kantayya: I think I watched Blade Runner too many times. The theme of A Drop of Life probably happened because of all those viewings of Blade Runner. I was like, “In the future, there are going to be sci-fi meters and you’ll have to pay for water even before you receive it.” Then I went to the People’s World Water Forum, and I was shaken out of my seat that these water meters exist today.

I think the thing that I feel passionately about is that we are commodifying our future and not realizing how you do the math. Water is life. It is a human right, and so it must stay public. We must pass strict regulations to protect it, because we’ve seen what happens in American cities like Flint, where the only water available is private, where you have to pay for it. Then I read book called Blue Gold: The Fight to Stop the Corporate Theft of the World’s Water by Maude Barlow. I saw a statistic that shook me out of my seat, which was that one-third to one-half of the world’s population, an estimated 4 billion people, will not have sufficient access to clean drinking water by the year 2027, which is 10 years from now, just a decade from now.

Since the making of A Drop of Life, I began to talk about the fact that there are no borders on this crisis. Because oftentimes people see A Drop of Life and they understand that my family is from India, they say, “Oh, I’m so sorry that that’s happening to you over there and in sub-Saharan Africa—in all of these countries in a galaxy far, far away.”

What they don’t realize is there are no borders on this crisis. Our water tables have been diminishing, partly because of climate change and over-pumping, for the last 50 years. Overnight we have seen these crises unfold where you have a chemical spill, and all of a sudden children at a high school say, “It’s not safe for you to take a shower or drink the water from your tap.” In those moments, what good is money?

We have to realize that our true wealth as a civilization is our natural resources. Too often we have seen in our politics the environment and economics be pitted against each other. My journey as an artist, and the people that I have met all around the world, is that that struggle is one and the same.
When your environment is diminished, when you can no longer drink your water, when there is no economic growth, we have to begin to change the way we do our math and realize that our biodiversity and our natural resources are the greatest economic resources we have in uplifting the lives of working people.

Often when I show the film, there’s a big debate about how much should we charge for water. This is something that we take for granted. My water turns up hot and cold. We never have to think about it.

We are living in an age where we can’t take those rights for granted anymore.

How did you first get interested in issues related to water, food, and energy?

Shalini Kantayya: I am an artist, and so I believe the big leap we need to make is with human imagination. When my grandfather was born in 1910, there were a billion people on the planet. In the world that my children are going to inherit, there will be 8 billion of us on this planet. That is just over 100 years. We have never seen that kind of growth. It is unprecedented in human history. That growth of population has been made largely because of fossil fuels.
We have one planet, and our natural resources have not changed while we’ve grown exponentially as a human civilization. So we need to radically rethink how we live in the world. That means our energy system; that means the way that we use water—all of these things.

What are some of the biggest challenges you face in your work, and how did you overcome them?

Shalini Kantayya: Being an independent filmmaker is full of challenges. In my darkest moments, I try to connect with WHY I am doing what I do. Reconnecting with my mission always pulls me back to center.

What advice do you have for the next generation of filmmakers?

Shalini Kantayya: Art-making and storytelling have been my most powerful tools. But I am a believer that we each have a garden patch where we can impact change. So each of us has to say, “This is my skill. This is what I have.” So I really believe storytellers, journalists, and weird Indian girls who love sci-fi all have a role to play. Whether we be scientists, lobbyists, or in the legal field, we each have a profound impact to make change. It doesn’t have to be thousands of people. It can be a small table of your friends getting together to impact change, and I believe that is just how transformation takes place.

What are your favorite books, films, websites and resources related to women’s issues, sustainability, or film production?