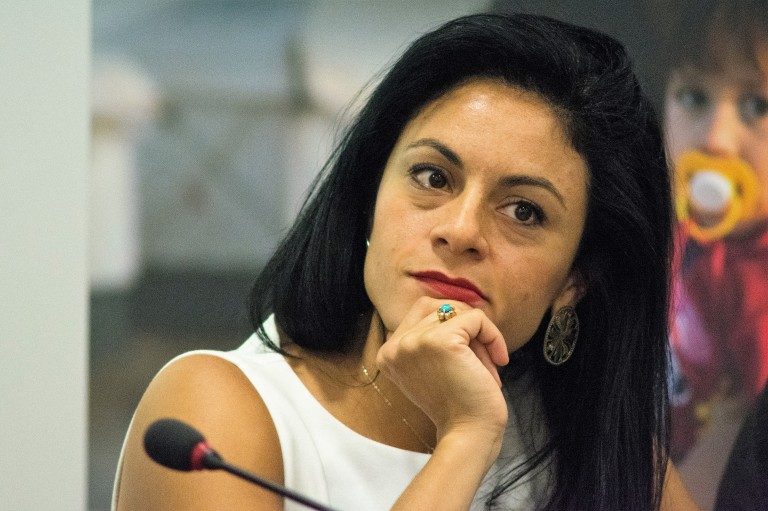 Heba Aly is the Director of IRIN, one of the world’s leading sources of original, field-based journalism about humanitarian crises. A multimedia journalist by training, Heba spent one decade reporting from conflict zones in the Middle East, Africa and Central Asia before moving into management. Her work for the Canadian Broadcasting Corporation, the Christian Science Monitor, Bloomberg News and IRIN, among others, took her to places like Syria, Afghanistan, Iraq, Chad and Libya; and she received a grant from the Pulitzer Center on Crisis Reporting for her work in northern Sudan. Heba is a regular commentator on humanitarian policy in her published work, in governmental briefings and at conferences around the world. Heba speaks English, French, Arabic and Spanish.

Heba Aly: I grew up in Canada of Egyptian parents and studied journalism and human rights at university. I started my career with short stints at Canadian news outlets like the Toronto Star and the Canadian Broadcasting Corporation before going abroad. My first exposure to international journalism was in West Africa, via an internship at the humanitarian news outlet I now run: www.irinnews.org. From there, I went on to report from Africa, the Middle East and Central Asia for various news outlets, covering everything from the war in Darfur to the Egyptian revolution of 2011, from youth joining al-Shabaab in Somalia to the Syrian refugee crisis. When I’m not working, I am playing soccer, appreciating Swiss cheese and chocolate, or Skyping with friends and family who I see much too rarely.

You are the Director of IRIN, an award-winning humanitarian news and analysis service, covering the parts of the world often under-reported, misunderstood or ignored. Can you tell us about some of your experiences leading IRIN, and some of the projects you have led?

Heba Aly: IRIN’s spin-off has been a real adventure – ultimately one of the most challenging, stimulating and rewarding experiences of my life. When we struck a transition team in early 2014 to plan the move out of our historic home in the United Nations, many people thought it was a pipe dream. But we believed there was a place for an independent organization putting world-class journalism at the service of the most vulnerable people on earth and we set out to make it a reality. The business model for this kind of journalism has been a real challenge, but we’re also seeing a lot of appetite for what we do. IRIN sits at the nexus of key challenges of our time: unprecedented levels of humanitarian need; a dearth of informed, responsible internationally-tuned media; and ever-more complex, global phenomena like climate change and migration. Outlets like ours can help make sense of our world, connect the realities of people on the ground with decision-making at the international policy level, and provide accountability and transparency.

Humanitarian response is now a multi-billion-dollar industry and there are many ways it could be more effective. With significant cuts to international aid expected by the US government under President Donald Trump, it is ever-more important that limited resources be used efficiently and accountably. The tens of millions of people affected by crises deserve as much. To that end, we are very excited about the recent launch of our new stream of investigative reporting. We have unearthed procurement fraud among international NGOs working in Syria; revealed that the United Nations’ landlord in the Central African Republic is on the UN Security Council’s own sanctions list for trafficking of so-called ‘blood diamonds’; examined the inequality of what we call the Humanitarian Economy (how money travels through layers and layers of sub-contracting in the aid system); and published a scathing account of the UN’s lack of transparency and accountability in the handling of sexual abuse of children by peacekeepers.

Our vision is a world where informed, high-quality journalism changes the minds, policies, and behaviors of decision-makers in a position to save lives, alleviate suffering, and maintain people’s dignity in times of crisis. We want to see IRIN become a must-read source for the broadest possible audience of influencers and change-makers. To that end, we are investing in producing high-impact journalism, and in particular, ramping up the work of our investigative unit, improving the user experience, and expanding our distribution channels.

From your experiences, what are some of the biggest issues women facing women in humanitarian crises?

Heba Aly: Women are disproportionately affected by crises. Women and children account for more than 75% of displaced people and research has found that women and girls are more likely than men to die in natural disasters, and at a younger age. In a crisis, women also have particular needs – for example, pregnant or lactating women – and particular vulnerabilities. Sexual and gender-based violence against women remains a major issue in crises, as do child marriage, trafficking, and other abuses. As men participate in combat or migrate to find work, women often carry a heavy burden as single heads of households.

But women are also regularly the heroines in the story. They are often better able to broker peace agreements or manage family or community resources. I am always amazed at how remarkably strong we women are. I remember meeting a mother of five at the largest camp for Syrian refugees in Jordan, just after she crossed the Syrian border. She had walked for hours in the middle of the night, with her crying toddler in one arm and a suitcase in the other, traversing an empty river bed amid sporadic shelling to get her kids to safety. That same night, I remember asking an elderly woman among the refugees how they withstood the overwhelming pressures of the long, tiring journey and how they had such strength. Her answer has stayed with me until this day. “You’re the wolf or the sheep. It’s eat or be eaten.”

The move to digital has disrupted traditional revenue streams that media depended on to survive: advertising is down and paying subscribers are tough to attract. Humanitarian journalism, in particular, is expensive to produce and does not easily “go viral”. Many in the media business are now engaging “brand sponsors” to fund their work – this essentially represents a mingling of advertising and journalism that sets a very dangerous precedent in my view.

At IRIN, we are trying to build an understanding of the importance of internationally-tuned media that can contribute to improved global governance. We know that a free press is essential in a democratic society to amplify the voices of the most vulnerable and hold the powerful to account. Isn’t it time we start treating quality, responsible journalism as a public good, and investing in it the way we do healthcare or education? That call goes out to governments and philanthropists, but also to individual global citizens: high-quality journalism is worth paying for.

But media organisations like ours also have a responsibility to use these challenges as an opportunity to re-examine how we can best have impact and to re-imagine what our product can be in these changing times. We must leverage technology to make our work more accessible, cost-effective, and dynamic; but we must also ask ourselves deep questions about how we can best serve our consumers today – and that may mean letting go of the ways in which we traditionally conceived of our role.

Heba Aly: It’s hard to be original here: many of us are deeply inspired by our mothers, but I like to think mine is especially special. My mother has always been a fighter. She would say the same about her mother, my grandmother, who always said: “No right will be lost so long as someone is fighting for it.” Whether in attempts to clean up her Cairo neighborhood; to advocate for the rights of Muslims in Canada; to help her students achieve their career potential; or to encourage me and my siblings to be better people, my mother has always carried the weight of the world on her shoulders. That is a heavy load, and I often worry for her. But I am so grateful that she has engrained in me the importance of not being a passive observer in life.

I have seen in my life the impact that incredible women can have on their families, their communities, their professions, and the world. A society can never grow if it does not tap into the talent of half of its people. Women have solutions, ideas and approaches that add such value to the challenges the world faces. Women’s empowerment is not just a human rights issue, it’s about creating the best world we can for everyone.

What are your favorite books, films, websites and resources about women’s empowerment, international development, and economics?

Heba Aly: Well, first and foremost, for informed, in-depth views of today’s crises: www.irinnews.org of course! You can also subscribe for free to our newsletter.

In such a de-centralized information environment, it’s hard to narrow it down: on Twitter, I follow Nanjala Nyabola for a touch of social justice and feminism in Africa, Karl Sharro for a satirical Middle East reality check, Aron Lund on Syria in particular, Peter Bouckaert for the pulse on crises, my colleague Ben Parker for healthy doses of aid industry snark, and Aidworker Jesus for significantly more aid industry snark.

I try to follow reporting from grantees of the Pulitzer Center for Crisis Reporting, as well as Somini Sengupta at the New York Times, Jina Moore at BuzzFeed and Colum Lynch at Foreign Policy.

What Went Wrong is an interesting new aid accountability initiative to keep an eye on. The Overseas Development Institute, International Crisis Group, and Center for Global Development are good think tanks.

I get a lot of my information through podcasts (Foreign Policy’s “Editor’s Roundtable” and Public Radio International’s “The World”) and newsletters (Dawn’s Digest for curated development news and Foreign Policy Interrupted for analysis by women experts).

On women’s empowerment, Swedish Foreign Minister Margot Wallström and her government’s feminist foreign policy are worth watching. And for the media lens, the recently published book Africa’s Media Image in the 21st Century: From the “Heart of Darkness” to “Africa Rising” is worth a read (disclaimer: I contributed a chapter to it) and How to Write About Africa, by Binyavanga Wainaina, is a classic. To pull it all together, the Aidnography blog by academic Tobias Denskus focuses on development, communication and (social) media.