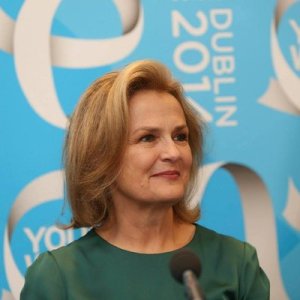 Kate Robertson is the co-founder of One Young World, the premier global forum for young leaders, which she set up in 2009. The Summit is attended by 1,300 delegates from 196 countries, featuring luminaries such as Kofi Annan, Professor Muhammad Yunus, Sir Bob Geldof, Paul Polman, and Arianna Huffington among others. Kate Robertson was formerly the Global President and UK Group Chairman of Havas Worldwide, where she was the highest place woman in the advertising industry worldwide. In 2012 she was named Advertising Woman of the Year by Women In Marketing and in 2014 was similarly honored by Advertising Week Europe. Kate has worked pro bono as a judge for the British Sports Industry Awards as well as for the Barclays Global Citizenship Awards with the CEOs of the Gates Foundation, of the Prince’s Trust and of the Clinton Global Initiative. Kate has Honorary Masters degrees from the University of Creative Arts and from the European Communications School. In 2014 she also awarded an Honorary Doctorate from the Lausanne Business School.

How did your background in law and career as Global President of Havas influence your interests in nonprofit leadership?

Kate Robertson: In terms of law, I don’t think it influences but it helps. f you’ve studied law you can take most problems and work out where you need to get to; what will get you there; what your options are; what the risks are. That kind of mental training is enormously useful in anything you try to achieve. If my time at law school influenced me regarding nonprofits, it’s really the fact that the commitment of some of our fellow students at UCT to changing the country (that South Africa was then under apartheid) was humbling. It consumed them and much of their lives and I never forgot watching them and their sacrifices – Fink Haysom, Geoff Budlender, Auret Van Heerden. One of our lecturers was the future Justice, Dennis Davis – a committed teacher, an important constitutional lawyer, a passionate warrior for the rule of law. They were all awesome – all I knew, and know today, is that it’s a privilige to even know these people.

In terms of being the Global President of Havas: Becoming aware that a climate of business behaving itself was developing; feeling relieved by that especially in the wake of the 2008/9 financial crisis when some businesses gave everyone else in the sector a bad name; being increasingly aware that the real global actors who can get stuff done are businesses; that leadership is where it begins and where it ends – not everyone is a leader but leaders for good are the most important need in the world. All that led us to run Kofi Annan’s campaign for COP15 – fantastic effort; Cannes Lions still say the best event they’ve ever had staged during their festival – and, at the time, it all came to nothing. But, I learned a lot, forged a precious friendship with Mr. Annan, and now we have some hope despite our own campaign’s end, the world has the Paris Agreement under the sublime leadership of Christiana Figueras.

How did you come to found One Young World and what were some challenges you faced when founding it?

Kate Robertson: The driving force was to find something we could get our teeth into that would make a lasting difference. For me leadership is everything and the idea that the world can be brought together as a human family is my emotional lodestone. I’m a lifelong fan of the Olympic movement and it’s founding principles. The challenges were answering the questions of skeptics and keeping going when no-one was prepared to commit to the idea of finding and encouraging a whole world of young leaders. We had to get our own language and justification sorted out and we had to get people to pay for delegate places. From a standing start that is really tough. The blessing was that Annan, Tutu, Geldof, Yunus weren’t skeptical – they all think that young leaders are the most important charge we have; they all believe it’s where they, and we, can make the right difference. And their early commitment kept us believing.

Can you tell us about what makes One Young World’s Annual Summit unique?

Kate Robertson: The fact that every single country in the world is represented is unique – you won’t find that at any other conference in the world; and other than the Davos World Economic Forum and the UN you never see such a gathering of prestigious and famous figures; we have the largest corporate footprint of any conference and in addition, just as importantly, the delegates represent every sector you can think of from NGO’s to education to politics to government business.

Outside your work, what are your favorite hobbies and pastimes?

Kate Robertson: My husband, my daughter, the cats and the dog!

What is your advice for the next generation of youth leaders and change-makers?

Kate Robertson: They don’t need any advice from me! But I would urge them to ‘get on with it’! We want them to lead – right now. The world needs them, their ideals, their amazing competency in the digital world. The most informed, most educated, most connected generation in human history are needed at the controls.

Kate Robertson: My mother – brilliant, brave, determined, optimistic, constant. The first woman on the board of a company in South Africa. The fact that she always had a job set out my road for me – that work is an enormous privilege; that I would always try to have work. She was a tough disciplinarian – and had a bunch a sayings which have kept me trucking – like “only boring people get bored”!

Kate Robertson: Book: I read about two a week so it’s impossible to have a favorite. I read most things except science fiction I think…

Websites: again too many but am a CNN, BBC, Guardian, TED, One Young World constant gardener.

I love series on Netflix, Sky, Amazon – Billions, Stranger Things, Last Chance U. Favorite time of the year is the period after the Summit in October when winter comes in, clocks bring darkness earlier, food gets comforting, Strictly Come Dancing starts on the telly, Christmas decorations appear, BBC does Children in Need, Christmas presents and cards – it’s the time of year when I count my blessings more and more. I know I’m lucky to live in the greatest city in the world; and lucky in so very many undeserved ways – all I can do is be grateful.