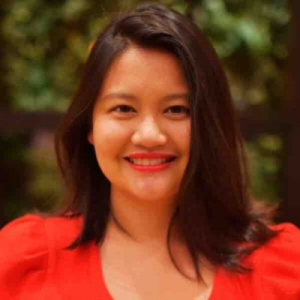 Virginia Tan is the co-founder and president of Lean In China, a women’s platform with over 100,000 members across more than 25 cities and 100 universities in China, which supports the goals and aspirations of Chinese women. She has spoken at UNICEF, Baidu, General Electric, Bloomberg, the British Council, Facebook, the Guanghua School of Management at Peking University, Tsinghua University, Singapore Management University, etc and has been filmed by BBC, Reuters, CCTV and Vice. She co-founded Her Startup in 2015, the first cross border startup competition for women tech entrepreneurs as well as She Loves Tech，a global initiative focusing on technology by women and technology for women. She is also the founding partner of Teja Ventures, Asia’s first gender lens venture capital fund, which targets early stage women impact companies. Virginia’s background is in law and finance, where she was an experienced finance lawyer for more than 8 years specializing in energy, resources and infrastructure sectors in emerging markets, and has worked in Europe, Middle East, Asia, Africa and South America. She moved to Beijing in 2013 to work on strategic investments related to the “One Belt One Road” initiative on behalf of Chinese state owned companies and financial institutions.

Can you share with us some of the highlights from your career in law and how your law career influenced you?

Virginia Tan: Working in law and finance for almost a decade prior to this has really shaped the way I think – in many ways I’m grateful to the years of training – a lot of these skills I now use as an entrepreneur on a day to day basis – such as pitching, negotiations, being able to multi task on several projects at a time. One thing that a career in finance and law gives you is a very strong work ethic , stamina and discipline from years of persistent hard work – now I am happy that I can apply that same work ethic to something which I believe strongly about. I can think of many highlights: being posted to China (for the first time in 2009) as a young lawyer and falling in love with the energy of China. Working  in the Middle East for a year in the aftermath of the financial crisis with our firms biggest client at the time, spending every day in negotiations with quasi sovereign borrowers to recover huge amounts of outstanding debt. This experience was formative – I spent that year learning about strategy, negotiation and tactics – and most of all, understanding people and cultures. I had an amazing boss at the time and his mentorship changed my life – he helped me discover my own potential  and strengths and then guided me to make the crucial decision to move to China. As a lawyer I also had many opportunities to do pro bono work with my firms partners in developing countries – something I relished – and I did multiple stints on the ground in Africa and in London advising non profit organsizations and charities around the world specifically on commercial transformation and sustainability, leveraging on my corporate knowledge. This has laid the ground for a lot of the non profit work I do today.

How did you come to Co-Found Lean in China and what were some challenges you faced along the way?

Virginia Tan: I had just moved to Beijing in April 2013 to work on One Belt  One Road Investments representing Chinese state pend clients. One night  I met a group of girls in a bar – we had all read Lean In by Sheryl Sandberg and decided to build the first Lean In community in China, from which Lean In China was born. There are and continue to be challenges : some are linked to women’s internal barriers – we realised that many women wanted to join, but not lead – and one of our big challenges is to encourage and incentivize more women to lead. Other challenges are ensuring you understand your local community’s needs and continue to serve them, finding the right strategic partners and ensuring the longer term sustainability of organisation.

Virginia Tan: In 2015, a group of us from Lean In China embarked on a project – to do a startup competition in Beijing for women tech entrepreneurs. What we did not expect was that in the first year top players in the Chinese startup ecosystem partnered with us – zhenfund, leading early stage fund, 36kr, dominant tech media, Sinovation works, top incubator, and cctv news did a half hour documentary on the competition. In 2016, we held the same start up competition in 4 countries with the finals being held in Silicon Valley judged by top VCs like Tim Draper. This year we came up with the She Loves Tech brand and the startup competition has now spread to 8 international locations – the largest startup competition  of its kind globally for women tech entrepreneurs – and added the global conference in Beijjng. Next year – we are hoping to bring She Loves Tech to more locations in Africa, the Middle East and Europe. I think She Loves Tech aims to be a platform for the best women led startups in the world and for top executives, entrepreneurs and investors to congregate – leveraging Beijing’s platform as one of the worlds top tech hotspots. I think it’s a terrific opportunity for the East to take a leadership role in building this ecosystem for women. We work with leading players in each local startup ecosystem we hold rounds in – to ensure that we source for the best pipeline and have the best resources to provide to our participants.

What do you enjoy most about your work with Lean in China and She Loves Tech?

Virginia Tan: The privilege of hearing women’s stories and understanding their experiences and most all how to create solutions which address their challenges and create maximum impact. One of the things we are doing now is building a gender lens fund to invest in ventures which are either women led or impact women positively, which can magnify the impact of platforms like She Loves Tech and Lean In China.

You’ve worked in Beijing, Shanghai, London, Nairobi, Dubai, Ghana, Nepal, and Peru. Can you share with us how you managed to work in so many different regions and any advice you have for individuals interested in working in many different countries/cities?

Virginia Tan: I think being able to adapt swiftly  in your local environment is key. Leave all your pre conceived notions behind. Be truly open to learning new things and meeting new people. Work hard at language – it is a key to understanding culture. Most importantly learning new things truly excites me – I see this as a challenge and having a steep learning curve is a great source of motivation for me.

What are your favorite hobbies/pastimes outside of work?

Virginia Tan: Reading before bed, Listening to jazz, exploring new places (in the city I live), solo travel off the beaten track.

Virginia Tan: Joy Chen, former deputy mayor of LA and now a bestselling author. I’m proud to call her a friend and mentor who has always believed in me.  One of the first things she taught me was that the purpose of life is love, not marriage.

What are your favorite books, films, websites and/or resources?

Virginia Tan: Firstly, The Alchemist by Paulo Coelho because it made me believe in the power of your dreams – that if you want something enough, that the universe will conspire to bring it to you. Books with strong historical narratives such as the Inheritance of Loss by Kiran Desai, the Museum of Innocence by Orhan Pamuk and and any travel literature by William Dalyrymple. Malcolm Gladwells David and Goliath. The Economist was and still is my favorite magazine.

In terms of films, The English patient, Dirty Dancing, The Help, Land Before Time. Any interactive cinema from Secret Cinema.

Websites – anything travel related. Www.thenudge.com for fun things to do in London – I used to plan my social life in London (in the decade I lived there) around this website.
Advertisements

Megan Foo is an undergraduate at the University of Pennsylvania from Hong Kong. View all posts by Megan Foo