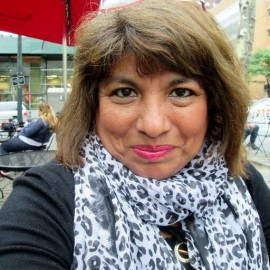 Felisa Hilbert is a United Nations Foundations Social Good Fellow and a Shot@Life Champion Leader. Shot@Life is a UN Foundation campaign that strives to decrease vaccine-preventable childhood deaths through education, advocacy and fundraising. She was born and raised in Veracruz, Mexico, moving to the U.S. nearly 24 years ago after marrying her husband Dan in Veracruz. Hilbert has always taken an active role in the community, with minority groups, and in her children’s schools. Several years ago Hilbert noticed that minority parents in her local schools were seldom seen in school activities, PTA meetings, or parent teacher conferences. She presented the idea of a “Multicultural Literacy Night” at the school with minority parents acting as teachers. What started as a small event at a school has grown into a Multicultural Diversity Festival now held at the Tulsa Technology center. This year, 30 countries presented, 10 groups entertained, 10 community resources offered their services and 1,126 guest attended. In August 2008, she created International Cultures for Education PTA (ICE PTA) with only 15 members representing 5 continents. The membership has now reached more than 100 members.

Can you tell us about your missions work in Mexico for children’s health initiatives?

Felisa Hilbert: After my basic required schooling, I enrolled with the Mexican Army for one year of pre- nursing training. As soon I finished that year I was called to serve for 20 months for the Mormon Church in the Guadalajara Mission, in 3 states. I served in communities where some families lived in one-room cardboard houses with dirt floors, which unfortunately, is the perfect condition for diseases to thrive and spread. After returning from my mission I enrolled in nursing school and volunteered many times to practice preventive medicine in rural areas, administrating basic healthcare and immunizations.

We would arrive onsite with the vaccines and the mothers usually did the rest by bringing their children to us for their shots. These mothers, understood the importance of early preventive care for their children. Nevertheless, I was saddened by the reality that we still were not able to reach many children. I also witnessed some heartbreaking incidents and I saw firsthand the pain and sorrow that children suffered due to a lack of vaccinations and medical care. It was there where my love of humanity and concern for global health were born. These experiences left deep impressions on me in my resolve to continue my nursing studies as a means of trying to provide relief. It was also when I resolved to do everything I could to make sure future generations of children would not die for lack of basic medical care.

How did you first get involved with the UN and can you tell us about your work there?

Felisa Hilbert: In 2011, I was selected as the Oklahoma Delegate by Parenting Magazine for their Mom Congress in Washington D.C. – and named a Champion of Change in Education by the White House. By the end of my first year there, I was invited in January 2012 to attend a Summit for Shot@Life conducted by the United Nations Foundation. At the summit it was like going back to my passion for global health. They were talking about children who were dying every 20 seconds from the lack of vaccines for preventable diseases – something I knew about so well from firsthand experience. 1 in 5 children around the world do not have access to the vaccines they need to survive. Their mission to provide basic vaccinations to children around the world greatly appealed to me. After connecting with Shot@Life, I realized that this was something I wanted to support and became very passionate in helping to make sure that I would not see another mother lose a child to something that could be so easily prevented. When I returned home to Oklahoma I conducted several fundraising events for Shot@Life. I felt (and still feel) like I was on a mission to do everything I could to educate people, create awareness, and raise money. Later I became a leader and mentor to champions from 3 states.

Shot@Life has been wonderful for connecting with, training and giving champions opportunities to speak in different events locally and nationally; and for providing fellowships to attend the Social Good Summits and other wonderful events. I have been an advocate for good all my adult life, but I’ve learned from Shot@Life how to write to my congressman, reach out to newspapers and use social media for our causes. Because of Shot@Life I have learned and developed the skills necessary to advocate for vaccinations on a global scale. It was Shot@Life that also sent 9 of us to Uganda with UNICEF for Family Health Days to observe conditions there of child and family health and education issues. It was so enlightening and eye-opening to see the similarities between Uganda and Latin American countries.

Also, you are very passionate about multicultural education. How did you develop this passion and start the International Cultures for Education PTA?

Felisa Hilbert: The Multicultural Fair started 11 years ago and has become a community festival in partnership with many of our city leaders, businesses and the Broken Arrow Visitors Bureau. This program is a free event for all the community and is an opportunity for minority parents to become teachers and to share their stories and cultures. This started as an PTA activity in the elementary school where I worked. The first year we had only 12 countries represented, then 15 the next year and quickly grew to become a community program that presented more than 30 countries and cultures every year! I wrote grants and found partnerships to pay for all the expenses of each year’s event. Each country or cultural representative displays and presents food, music, books in different languages, and tri-fold posters with information on their country, etc. It became a hit! What started as a small event at an elementary school grew into the Multicultural Diversity Festival now held at the Tulsa Technology Center. The last time we did it we had 32 countries presenting, 10 groups entertaining, and 10 community resources offering their public services.

These two accomplishments most reflect my belief that if you educate and empower the parents you can change the future of their children and educate the next generation. When parents are involved in the schools and value education, their children can be proud of their heritage and experience academic success. I guess you could say that I have a missionary’s heart and a passion for serving students and empowering parents to be advocates for their children’s education. I have been a volunteer for some 40 years and an educator committed to teaching all the values and richness of cultural diversity in our schools.

What are some of the biggest differences in the issues you’ve seen facing child health in the US and Mexico?

Felisa Hilbert: Sadly, I see a lot of educational programs and money that are ignored or not used here in the US. Sure, the system has its problems in reaching out to everyone in need, but just the same, there are many others who don’t believe issues such as child vaccinations apply to them and their families. Poverty also causes its own problems for the people who have limited access to healthcare for their children. Oh, and do I really have to go into the debate over legislating an “affordable care act” here in the US? On the other hand, Mexico’s problems and issues with child health come from a system that doesn’t always provide for its most needy citizens. This creates limited resources and an apathy and disbelief in the people which is directed back at the government – even in spite of sincere efforts to provide for its people. The issue is further compounded by the overwhelming poverty and remoteness of rural communities that most need health services. Add to that Mexico’s own cultural diversity – even though Spanish is the national language spoken by 92% of the population, there are still another 68 indigenous languages spoken in the country. Doing a little math, that means there are close to 10 million people who don’t speak Spanish!

What are some challenges you’ve faced and how did you overcome them?

Felisa Hilbert: For starters, I was born in a developing country with limited resources. Later when things got better for my family – this was taken away when my father died while I was 9 years old. However, I was an unusually bright and happy child and could see possibilities or solutions where others only saw obstructions and defeat. When religion became an important part of my life, it added faith to go with my optimism and belief in myself. Moving to another country as a professional adult when I married my husband, Dan, was a big challenge. From the beginning, I had to leave my family, adapt to a new home country, learn a new language and culture and eat different food. As if marital life and motherhood didn’t present enough of their own difficulties, serious medical and health issues sorely afflicted me for years. Again, a cheerful disposition and a belief in prayer have kept me going. All of this comes to bear in my volunteer and humanitarian work. Somehow my enthusiasm for and faith in the basic goodness of people is contagious and produces a synergy that is difficult to define or explain in the successful outcomes of so many projects and programs I’ve been involved with. I can’t take credit for it all, I truly believe in God’s divine influence that allows me to motivate the people I work with to deliver their best efforts in real team-led accomplishments.

Felisa Hilbert: Many women have impacted my life. I came from a strong generation of women. My mother was a very resilient and brave woman who had a very hard life. My daughters in their own way have changed me, too. I always knew what I want to do and did it – but when I became a mother my life was impacted forever. I wanted to work harder and do everything in my power to be an example to my girls and my son. I want to make this world better for them, all the other boys and girls in my community – and the communities I visit in my humanitarian trips.

Felisa Hilbert: A couple of my favorite books are “Mountains Beyond Mountains” by Tracy Kidder and “When God Winks at You” by Squire Rushnell. I love all Jane Austen movies; the “King’s Speech” is a fantastic movie about overcoming personal adversity; and I find inspiration in many historic documentaries and biographies.