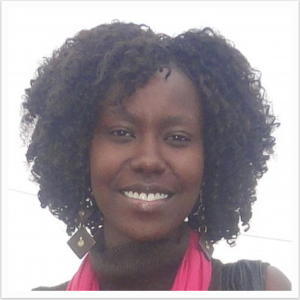 Naomi Mwaura is a young Kenyan lady passionate about implementing social reforms in Africa among African men and women, because she sees the value and potential in Africa. As a feminist with a Masters in Business Administration, Naomi is a true leader in her field. She is the founder of FloNe Initiatives, a non-profit organization that facilitates program in social change, sexual and reproductive health and rights and gender equality.

Naomi Mwaura: I grew up in rural Kenya and saw some of the inequalities faced especially by women. The skills gained at University allowed me to start Flone Initiative and address the social issues in my society.

Women LEAD: You are the Founder of Flone Initiative, a nonprofit organization that facilitates programs in social change, sexual and reproductive health and rights, as well as gender equality. Can you tell us more about Flone Initiative and its impact?

Naomi Mwaura: Flone Initiative through its Sexual and Reproductive Rights has influenced students in the schools we work in to make informed choices about their sexuality. The Gender Equality program has helped public transport operators understand and reduce issues of gender equality, sexual and gender based violence. It is our hope that we will continue to increase our impact in these thematic areas.

Naomi Mwaura: The One Billion Rising Campaign is a global campaign that works towards eliminating Gender based violence. My role as the Kenyan Coordinator is to engage Kenyan communities to be a part of One Billion Rising For Justice.

Women LEAD: In your opinion, what are the greatest challenges to eliminating gender-based violence?

Naomi Mwaura: GBV, which at its core is the abuse of power, is rooted in gender inequality and discrimination. The greatest challenge of eliminating GBV involves influencing changes in knowledge, attitudes, and behaviors among women and men, young and old, victim and perpetrator, concerning issues of gender and power.

Women LEAD: What does feminism mean to you?

Naomi Mwaura: Feminism to me is the commitment to achieving the equality of the sexes, defending a state of equal political, economic, cultural, and social rights for women.

Naomi Mwaura: My grandmother and mother, who showed me that a woman could be her own heroine.

Women LEAD: What advice do you have for prospective social entrepreneurs and women leaders?

Naomi Mwaura: Relentlessly follow your dreams and work towards achieving nothing less than the best in life. Don’t keep waiting for an opportunity to come to you, rather, understand that it is you who must create the opportunities.

Women LEAD: Are there websites or books that are inspiring you right now about gender equality, women’s empowerment, and education?

Naomi Mwaura: Unbowed by Wangari Maathai: In this book, the Nobel Prize winner Wangari Maathai recounts her extraordinary journey from her childhood in rural Kenya to the world stage. When Maathai founded the Green Belt Movement in 1977, she began a vital poor people’s environmental movement, focused on the empowerment of women that soon spread across Africa. Persevering through run-ins with the Kenyan government and personal losses, and jailed and beaten on numerous occasions, Maathai continued to fight tirelessly to save Kenya’s forests and to restore democracy to her beloved country.Infused with her unique luminosity of spirit, Wangari Maathai’s remarkable story of courage, faith, and the power of persistence is destined to inspire generations to come.

Lean In by Sheryl Sandberg: The book challenges the world and especially women to change the conversation from what women can’t do to what we can do, and serves as a rallying cry for us to work together to create a more equal world.