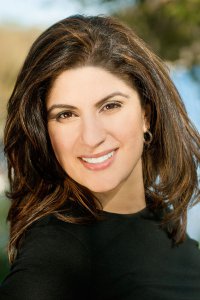 Nadia Hashimi is a pediatrician, women’s empowerment advocate, and the author of the novel The Pearl That Broke Its Shell, an international bestseller chronicling the lives of an Afghan girl and her great-great grandmother who overcome gender inequalities and human rights violations in Afghanistan. She will also publish the novel When The Moon Is Low in July 2015, which follows the journey of an Afghan family as they flee Taliban-controlled Kabul and live as undocumented immigrants in Europe.

Nadia Hashimi: I’m an Afghan-American. My parents immigrated to the United States from Afghanistan in the early 1970s. Growing up, I was fortunate to have a large extended family around me. In all of our homes, the celebrations and traditions of Afghan cultured thrived. At the same time, we assimilated into the American culture around us. I felt like we took the best of both worlds. With the support and encouragement of my parents, I finished college and medical school and went on to become a pediatrician. In 2008, my husband convinced me to be serious about my writing aspirations and now, thanks to his wild idea, I’m also a published author.

Women LEAD: What inspired you to write The Pearl That Broke Its Shell?

Nadia Hashimi: Growing up in America, my family watched Afghanistan from afar. I was painfully aware of the vast difference in experience between me and my counterparts in Afghanistan. My cousins or other girls growing up “over there” were living in a country at war, with rockets exploding over their homes and schools being shut down. The brutal Taliban regime made a name for themselves in their remarkably cruel subjugation of women. Though the Taliban have been ousted for the most part and schools are open to girls, the situation is far from perfect. There are many crises in Afghanistan today: drug addiction, child “brides”, political corruption, education inequality, depression and suicide. I wanted to tell a story that would show how these issues affected the life of one Afghan girl because the impact of these issues is often lost in daunting statistics. The Pearl That Broke Its Shell is not the story of all Afghan girls, thankfully, but it is the story of too many.

Women LEAD: Why do you write?

Nadia Hashimi: When I first started, I wrote because I’ve had a lifelong love for the written word. (I’m never without a book!) As my first manuscript came to a close, my motives evolved. I wrote because I had stories in me that needed to be told. It’s turned into a true passion, where I wake up with words and characters in my mind. I write because I love it, which is the best reason to do anything and the only way to do anything well.

Nadia Hashimi: Women’s empowerment used to matter to me because I was a girl and because my parents instilled in me that women deserved equal rights. Now that I have a daughter, women’s empowerment matters even more because I want my daughter to feel she has the capability and potential to do anything her brothers can do. Thankfully, the challenges she faces will not be the same as those of girls or women in other parts of the world. In the United States, women can vote, drive and enter any kind of education program they choose. But gender inequality takes on many shapes and colors: unequal pay, a person telling her engineering is not for her, or kids teasing that someone “throws like a girl.” I want my daughter to have the voice and confidence to speak out when she sees or hears the inequality, even in its most subtle forms.

Women LEAD: What advice do you have for future women writers?

Nadia Hashimi: Consider what you want to write about carefully. To write anything well, it’s important to be passionate about the subject matter. It doesn’t have to be a social issue. It could be a well-developed character or new energy technologies. Whatever it is, you must feel a strong draw to write about it or you won’t be able to compel anyone to read it. Second, read extensively. Think about what you liked or disliked about what you’ve read. You will be picking up tricks on clarity, description and plot development. These are skills all writers need to hone. Third, begin by writing a paragraph or a page. It is daunting to think about writing 300 pages of prose but if you start with one page, the second will follow and the third after that. Afghans have a saying: “Drop by drop flows the river.” That’s definitely true for writing.

Nadia Hashimi: This is an easy question to answer. My mother’s been an inspiration to me all my life. She grew up in Afghanistan and was one of only a handful of women enrolled in the engineering program at Kabul University. She was awarded a scholarship and travelled alone to Holland where she obtained a master’s degree in civil engineering. She and my father taught me to work hard, set my goals high and believe in myself. They taught me that my voice mattered. If every girl could grow up with that experience, we wouldn’t have to be talking about women’s empowerment.

Women LEAD: Are there books, films, websites that are currently inspiring you about gender equality and women’s empowerment?

Nadia Hashimi: The good news is there are a lot of motivating resources out there. I’m a big fan of the Mighty Girl website. They have a fantastic collection of resources for parents of young girls from Halloween costume ideas to books and spotlights on girls making an impact on their world. I loved Margaret Atwood’s book, The Handmaid’s Tale, because in it she created a shocking world where women are reduced to vessels of child bearing. They are barely people. When we look at what’s happening in some corners of the world, Atwood’s Gilead becomes less far-fetched. In the movie world, I watch films with a more critical eye now. I enjoy films that don’t portray all females as weak, bikini-clad maidens waiting for a knight in shining armor to save them. I like bold, three dimensional women since that’s a better reflection of our reality. I love advocates like Amy Poehler because she shows us, with a funny and accessible voice, that women can be successful, should speak up for themselves and should not think of feminism as a dirty word. I loved when she said about women who renounce feminism: “That’s like someone being like, ‘I don’t really believe in cars, but I drive one every day and I love that it gets me places and makes life so much easier and faster and I don’t know what I would do without it.’”

To learn more about Nadia Hashimi, her passion for women’s and girls’ empowerment and The Pearl That Broke Its Shell, read this blog post on Girls’ Globe.