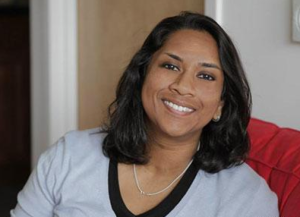 Mala Kumar is an international development practitioner with the United Nations. She is the author of the novel, The Paths of Marriage, which follows three generations of Indian and Indian-American women from Chennai to New York City. Mala hopes her writing will serve as a catalyst to a more open and empathetic dialogue on human rights and gender equality.

Mala Kumar: By profession, I am in international development with the United Nations. My work looks at how information communications technology can better international development solutions – also known as ICT4D. I was born in California and raised outside of Richmond, Virginia in the States. New York City has been home for the better part of the last six years, and I am incredibly excited to be moving back after spending three months in central Africa for work.

Women LEAD: What inspired you to write The Paths of Marriage?

Mala Kumar: The Paths of Marriage is an amalgamation of my own life, my family’s life, observations in my work, and a growing need to bridge the gap between different communities – especially the South Asian and LGBT communities. It’s a way for me to talk about difficult issues that I can’t always address in my work.

Mala Kumar: Women’s empowerment matters for many different reasons. In the most basic, logical sense, it means enabling half (or more than half) of the world’s population to reach their potential. Countries that have figured out how to do this have some of the best standards of living, longest life expectancies, lowest crime rates, and best economic outlook. That’s not a coincidence. On a higher level, women’s empowerment matters because it is giving voice to a population that has been historically and systematically relegated as inferior or unworthy across continents and time.

Women LEAD: What are some steps one can take to end the practice of child marriage worldwide?

Mala Kumar: I wish I had the magic cure-all answer to that question. The fact remains that child marriage happens across several continents, countries, classes, castes, religions, language groups and ethnicities, so there is not one cultural or societal commonality to target in eliminating the practice. From the data that is available, we do know the practice drops significantly – often entirely – when the education level of a population, especially in women, goes up. So with education and strong women’s empowerment movement, I think there is hope the practice will end.

Mala Kumar: I’m going to have to be clichéd and talk about my mother. As in my book, my mother had an arranged marriage in real life. Despite all of the cultural and emotional baggage she was made to carry as a young girl and young woman, she did her best (and I think succeeded!) in letting me grow into my own person and make my own decisions. At times, life has dealt me tough situations, though I have had the amazing privilege of having my mother’s unconditional support through it all. To empower women, women must support other women, and my mother always made sure to do so for me. For that, I am forever grateful.

Women LEAD: What advice do you have for future women leaders?

Mala Kumar: Support each other. As women, most of you will work twice as hard to get half as far as many of your male colleagues. The worst part is that with rare exceptions, you will not be able to pinpoint specific instances where you did not get your fair share of credit, or you did not advance as you should have. Perhaps this will be to no fault of any one person, but will instead be because of longstanding biases or discrimination that even we as women have trouble describing. What we can do to help break down these unfair systems is to simply support each other. This does not mean you should hire or promote someone solely because of one’s sex or gender. What it does mean is that you should take the time to recognize different strengths in different people. Take the time to understand someone’s background or life story or reasoning for doing what they do. Having worked around the world, I can say that no one and nothing is as straightforward as it seems.  Don’t neglect to apply that to your fellow women.

Mala Kumar: I was recently featured in a great blog called Girls’ Globe, which is dedicated to women’s empowerment and issues affected girls and women around the world.

My top women’s empowerment book would have to be the graphic novel Persepolis.Marjane Satrapi’s account of Iran’s modern history through a young woman’s eyes provided such a rare and beautiful look into a part of the world dominated by misogynistic voices.

I loved Khalid Hosseini’s A Thousand Splendid Suns. I think it showed how horrifying and incapacitating gender inequality is on an individual.

Whenever I think about women’s empowerment in film, I think about Deepa Mehta’s Elements Trilogy – Water, Fire, Earth. Each movie deals with a difficult topic in India and shows the cultural wear on women. Each movie will break your heart.

Finally, I can’t talk about women’s empowerment and not mention M.I.A. Yes, she is highly controversial at times, and no, I don’t always agree with what she says. But she is undoubtedly one of the most powerful voices for women’s empowerment – especially for South Asian community. Bad Girls is my unofficial life anthem, as I’m sure it is for many women around the world.